The History of Glendower Farms

Once upon a time, in the 1830’s, a man named John Finlayson had a dream to work his own farm.  He moved from South Carolina to a small community in North Florida settling on a beautiful property and beginning farming. He and his wife raised their children, who raised their grandchildren, who raised their great-grandchildren, and so on. Years down the line, I married my sweet husband and moved to this beautiful property. Our children love to tell that they are the 8th generation to live on the Glendower Farm property. There have been good times, as well as hard times. The invention of electricity and running water, the Great Depression, and one house burned to the ground. Babies were born, and babies (and mothers) died during birth. Through it all, there was enough draw to the property that someone from the family chose to work the farm and raise their family here.

When I was 7 years old, Whit’s immediate family moved back to Monticello from neighboring Tallahassee. We attended the same school, and the same church, where both our families had been members for generations. He was a quiet and thoughtful boy, while I got school notes about how I talked too much in class. Whit and I hardly spoke, whereas his sister was one of my best friends. We went to youth group, drama group, and babysat for the same families. I had plenty of sleepovers at her house, and a few with her at her grandparents’ house at Glendower Farm. I never dreamed that 15 years later, I would be married to her quiet and thoughtful brother.

The beginning of our marriage was lived in the cities of Tallahassee, FL and Gainesville, FL while we finished college and grad school. We had a strong group of friends and were very involved in a church in Tallahassee, but upon graduation, we opted to stay close to family in Monticello. The house at Glendower was soon empty after his grandparents died. We thought it would be a wonderful place to raise our 4 children, and they loved that there was room enough to have a dog. Eventually we moved into the Glendower house, and Whit worked as a family practice PA in Monticello.

It is difficult to live in the country and not dabble with a homestead farm. At different times, we raised chickens, goats, and turkeys. We planted our own garden and enjoyed the harvest...if the cows or goats didn’t get to it first. When my father-in-law, Hines, approached us about raising Iberian pigs on the property, we thought it would be a wonderful chance for our kids to learn about farming, keep the family tradition going, and the income would sustain the upkeep on the property.

When that first group of pigs scrambled off the truck onto our property, I don’t know who was squealing more, the pigs, or my 4 kids who were hanging over the gate. Then the real work began. Feeding, managing the herd, and more recently, finding a market for our delicious pork. The daily feeding is handled completely by my kids and me. They have learned to drive earlier than most, lift feed buckets, herd animals, tag little ears, endure heat, mend fences, and so much more. They’ve also learned to work as a team, plan for possible mistakes, and communicate more clearly. I’d be lying if I said they’ve loved every minute of it, but they are very proud of what we’ve worked for. They’re wiser due to lessons learned, and they would love to say that their efforts produced a successful family business for years to come. I’m very proud of the determination, work ethic, and consistency I’ve seen produced in my children from working on the farm. They’re all free to choose their paths in life, and these skills will benefit them no matter what road they choose. However, if business is good, and should they choose to stick around, in the distant future I’d love to see a 9th generation enjoying life at Glendower.

Brief History of the Iberian Pig and its Reintroduction into the U.S. 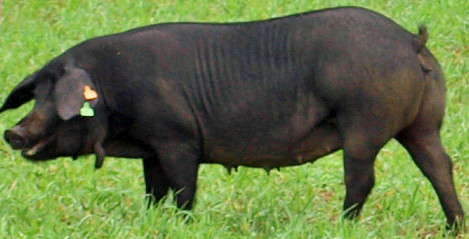