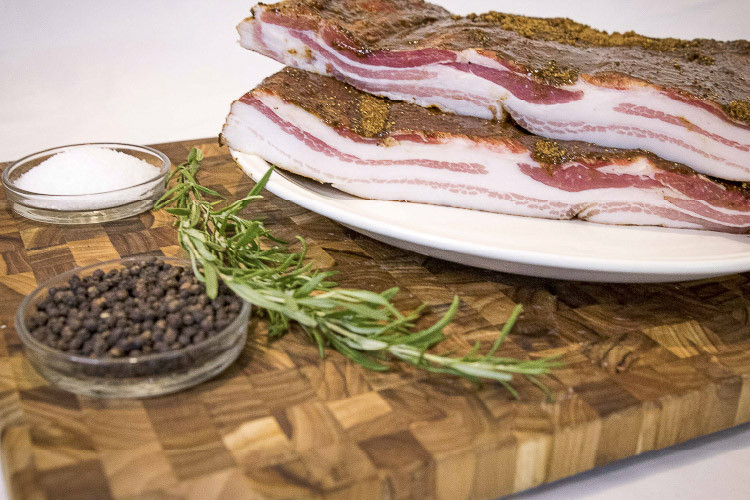 Our bacon is dry-cured the old fashion way, not injected and brined like most store-bought bacon. We rub this one with with a mixture of sea salt, and spices (including smoked paprika and cinnamon), but no sugar. Instead of curing salt with sodium nitrite, we add celery powder and cherry powder for those who prefer a more natural form of curing. The bacon is cured for 5-7 days then hickory smoked. (We technically can't call it "cured" since we've substituted celery powder as the source of the "curing" agent, instead of sodium nitrite.)
Iberico bacon has a higher ratio of fat to lean with an incredible taste. Iberico bacon should be cooked slower than store-bought bacon, allowing it to render some of its high-oleic, flavor-filled fat. (We like starting it on a rack in a pan in a cold oven; set to bake at 300; cook until the fat begins to brown a little. Slow cooking on low heat in an iron skillet works fine, too. Don't overcook!) Also, SAVE THOSE FLAVORFUL DRIPPINGS to use in cooking later. They may just be the best part of this cut. To prolong their flavor, store drippings refrigerated in a sealed, light-blocking container.